Thinking Through Creation: Genesis 1 and 2 as Tools of Cultural Critique 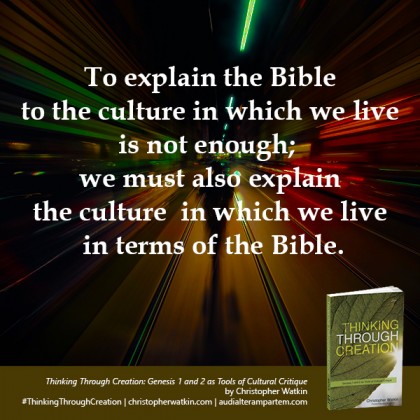 I had heard of Christopher Watkin, professor of French though at Monash University, a few times through friends who work for AFES at Monash and those who go to his church. But it was only when I did an Open Learning course he was teaching, ‘Postmodernism and the Bible: Derrida and Foucault‘ that I became a fan. Christopher and I share the same desire of seeking to listen carefully to the ideas of others, and then interact with those ideas from a Christian point of view.

After completing the course, Christopher asked if I would like to receive free copies of some of his forthcoming books, in exchange for reviewing them online: I happily agreed — free things!

The first of these new books, Thinking Through Creation is a great read, and I hope it will quickly became a classic among those, like in AFES, who are seeking to equip Christians to think deeply and Christianly. This book is the first of a much larger work that Christopher intends to produce, doing similar stuff across the whole Bible: not just reading what the text of Scripture says, but unpacking the underlying ideas, and the values and actions which flow from these.

Chirstopher looks at the philosophical and ethical implications of the doctrine of the trinity, of creation, humanity, personhood work, Sabbath, power, functionalism, environment and much more. For those who have already read a bit in this, much of the content will be familiar, but it is great to have a one-stop-shop for all these ideas.

Likewise, Christopher is not the first writer to expose unsatisfactory dichotomies, by finding a more sophisticated middle way (his term for this is ‘diagonlisation’). But his contribution to this area of nuance and synthesising approach is a highlight of the book, as he uncovers so many of these false dichotomies:

A particular strength of the book is the way in which Christopher provides substantial quotes from and interaction with various philosophers and other theorists. This is more than the easy grab-quotes from an IVP apologetics book, but rather genuine contact points with different philosophical views. Reading the footnotes and supporting material gives you heaps of leads to explore further, both Christian and non-Christian thinking.

There were a few points where I raised an eyebrow or wanted more:

The writing is clear and engaging, although there are extended quotes from philosophical sources and a decent smattering of technical terminology (‘basicity’ was one that particularly made me laugh). The text is broken up with simple diagrams and helpful headings which help you keep track of the argument.  Each chapter ends with a summary of basic ideas and rich tutorial-style questions for further reflection or discussion. There is also a glossary at the end of the book.

The book would be a great training text for uni students, MTS apprentices or theological students. It would also be enriching reading for the tertiary-educated Christian keen to keep thinking deeply. The would would serve preachers as a great companion book for sermon preparation, to help apply theological concepts to everyday life.