Christian churches in many Western nations face a variety of challenges to health and vitality. Some widespread indicators of social change that have impacted on religious vitality include:

This Fact Sheet outlines some evidence for each of these indicators and draws the conclusion that there is a need for revitalisation and innovation in church life.

This is one of a series of NCLS Fact Sheets that examines the place of innovation in church life.

History of Australia’s Religious Vitality
Australian indigenous spirituality, including a deep connection with the land, has a long and deep history, dating back 40,000 years. Yet, in Australia’s white history there is no glorious age of religious vitality. The early days of white settlement saw a shaky start with the intertwined relationship of Christian church leaders with the authorities of the day. Irish convicts brought their Catholicism, set against the Church of England heritage of much of the establishment.

It could be argued that the closest thing to a ‘golden era’ for religious vitality was the 1950s and into the 1960s: a period of economic boom, conservative government and growing churches with burgeoning Sunday Schools. Conveniently, this was the period when the post-war baby boom generation – the bulge moving through the python of time – was of Sunday School age.

Decline in Christian Religious Affiliation
The majority of Australians claim some Christian religious identity or affiliation when asked. However: 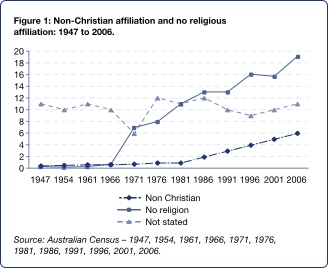 Overall Decline of Church Attendance in Australia
Frequent church attendance is a different measure to affiliation. It measures the proportion of the population who attend church at least monthly.

Whilst church attendance may be declining overall, it is not the case that all denominations are declining. In Australia, NCLS analysis over time identifies that there are Evangelical and Pentecostal denominations that are growing. 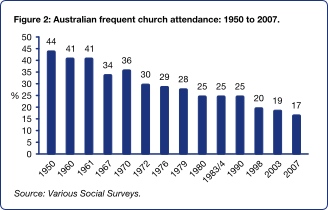 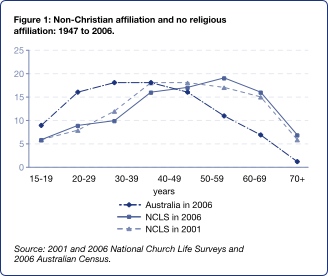 This research not only demonstrates the gap between church and community, but also the increasing ageing that is taking place as younger generations are not present in sufficient numbers to replace older generations passing on. The average age of an Australian church attender is 53 years of age (2006 NCLS). Church Life Surveys over the past 15 years have confirmed the ongoing gap in the age profiles of church attenders compared to the wider community.

Some denominations are growing and continue to have very high levels of younger people. For example, the average age of the combined Pentecostal denominations and movements is 39 years of age. Their age profile is actually younger than the wider Australian community (2006 NCLS Pentecostal Church Life Profile). 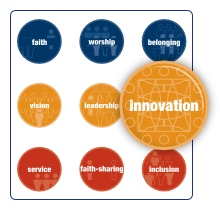 These results highlight an urgency in timeframe. Over the next few decades, many churches will face the loss of a sector of committed and loyal attenders who carry knowledge and experience. The implications are far-reaching and churches will need to prepare for a shift in constituency.

Younger age groups are viewed as the ‘carriers’ of many of the new values that have emerged associated with social and cultural changes.

There are too many churches that are losing touch with those beyond church life or with a new generation of church attenders.

While the Christian message remains unchanged, an openness to change and a spirit of innovation are part of what is needed to reverse these trends.