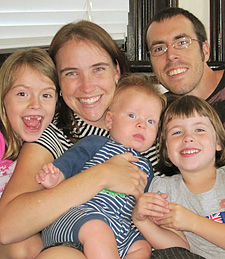 Soon-to-be church planter Jai Wright says it was the example of past church planters that is inspiring him to take his family to Northern Queensland.

“I seem to have been in and around church planters most of my Christian life. A missionary from the Philippines and founding pastors in the Fellowship of Independent Evangelical Churches come to mind,” Jai says.

“It was exciting to hear their stories of unbelievers turning to the Lord Jesus. That's what I'm passionate about.”

Jai is in the process of building a team dedicated to establishing a church in Mackay.

“I've had support of various kinds from my home church and from others within the Fellowship of Independent Evangelical Churches,” he says.

Raising a launch team represents the biggest challenge for the next twelve months, but Jai can see local support growing.

“In small ways support is coming from Christians all over the place, including from churches in the region we're hoping to plant in.”

What can we pray for Jai about?

The hard yards ahead and his goal to give thanks for the blessings God bestows on his Christian brothers and sisters – especially if he feels as though he’s not being blessed the same way.

“This is what it's like to live in God's world under his rule,” Jai says.

“Accept that fact and you find joy in Christ. Don't accept it and only bitterness and envy and anger will grow.”

Jai Wright was assessed and approved as a Geneva Push church planter in 2009.

If you would like to be assessed as a church planter by The Geneva Push, register for the next In The Chute conference.

This is the first article in a series titled Two-Minute Church Planters, introducing the Geneva Push supporters to the planters and coaches that make up Australia’s church planting community.

Confessions Of A Failed Church Planter