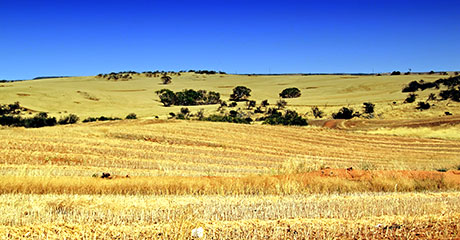 Rural ministry and the future of mission

Over the next three weeks Mark Short from the Bush Church Aid Society will share his insights into country ministry, the assumptions that underpin it and how things will have to change if we're to build thriving congregations in Australia's rural areas.

Earlier this year Monica and I were in the audience for the “When the Bush Comes to Town’ edition of Q and A.   The makeshift studio was decorated with hay bales, there were a couple of bemused-looking alpacas greeting us as we walked into the venue and before the broadcast we were ‘warmed up’ by a bloke with a guitar singing 80’s rock covers with  a generic country twang.  Clearly the producers had their own assumptions about what life in the bush looks and sounds like!

In mission our unspoken and untested assumptions are generally the most misleading.

When the organisers kindly invited me to share in this session I was given the title “the future of rural ministry”.  I asked if I could change it “Rural Ministry and the Future of Mission.”

The change is subtle but significant.

We often assume that the bush is sheltered, at least for a time, from the cultural and technological changes sweeping through the rest of western culture.  It can even be comforting to imagine that somewhere over the ranges there is a rustic backwater where life is simpler.

If we want to understand the challenges facing the church in the west we are told to look to our big cities, because as goes the city, so goes the culture.

Well, I’m going to turn that assumption on its head, for two reasons

Let me unpack that final point by describing five different types of rural communities we encounter at BCA and how each one highlights a pressing missional challenge for all of us.

Mining communities and the challenge of fluidity

I’ve chosen the label fluidity to sum up those trends – everything and everyone seems to be on the move.  Then let me tell you about places in Australia that are even more fluid than our big cities.

It’s not unusual for a BCA minister in one of our mining towns to farewell half of their congregation each year. And that congregation will be young and culturally diverse – when I visited the church at Newman there were something like 20 nationalities in a congregation of 60.  Members of that congregation will be engaged in a variety of working arrangements – not only FIFO, where the mine worker leaves home in the city to relocate to a mining camp for up to two weeks at a time, but the emerging pattern of reverse FIFO where a worker sets up home in the mining town and flies to the city every couple of weeks to catch up with his wife and family.

Our Anglican parish structures originally developed in a settled world, where people were born, lived, work and died within a few square kilometres around which we placed discrete parish boundaries.  But that is not our world and it is certainly not the world of our brothers and sisters in mining communities.  We have much to learn with them and from them as they adopt a generous kingdom perspective that equips Christians for ministry wherever life and work might take them…