Victorians ready to get in the chute

More than 50 potential church planters and supporters from across Australia have gathered in Melbourne for Victoria’s first In The Chute conference.

“In The Chute is about getting together guys who know what it’s like to break ground for Jesus, and sharing their knowledge with the next wave of Australian church planters,” says Geneva Push Director Al Stewart. 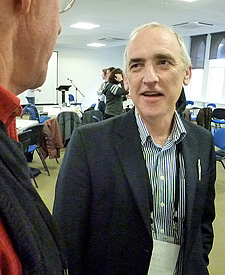 Day one kicked off with a stirring examination of the mercy of God by Andrew Reid – Old Testament lecturer at Ridley College, Western Australian church planter and now senior minister at Holy Trinity Doncaster.

Andrew told attendees that God’s divine ‘hesed’ or mercy has to be foremost in their minds if they hope to plant churches.

“This conference is not about rebuilding denominations, it’s not about building reputations,” he warned. 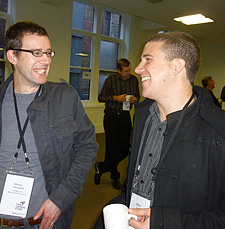 Geneva Push director Mikey Lynch then led attendees through a detailed consideration of the characteristics of a church planter.

But Mikey says The Geneva Push’s intention is not to create a new collection of hoops to jump through, but to become a rallying point for like-minded Christians.

“Geneva stands for anyone who is evangelistic, who’s reformed and who wants to reach Australia,” he says.

Al Stewart emphasised that there would be pain pushing forward into untouched communities, often as much from inside the church as out.

“In reaching Australia, there will be pain in that we will have to persuade people – push them – out of their comfort zones,” he added.

“All churches want to grow but not many are prepared to endure the pain of change, which is essential.”

But The Geneva Push is determined to encourage and equip church planters to establish hundreds of Biblically grounded, growing churches.

“We’ve got to be prepared to allow people to take risks, and give them permission to fail,” he told his Melbourne audience.

“We have to be quietly determined and it may take time to make an impact. But God will grow his Kingdom.”

Learning from your last event