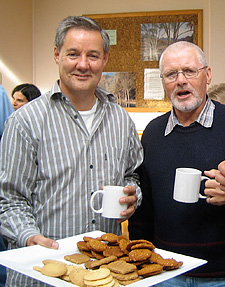 Tasmanian church-planter Brian Vaatstra says building congregations in burgeoning and alternative communities has taught him his weaknesses won’t stop the gospel breaking through.

Pastor Vaatstra is overseeing four church plants in the Kingborough and Huon Valley regions, where teams are confronting widely different barriers to the Gospel.

“Kingborough is a typical Australia suburb that is growing quite quickly,” he says.

Members of Kingston Christian Reform Church have had to deal with all of the secular urges confronting mainstream Australia, but that has not prevented them planting three churches in six years.

“We wanted to reach more people for Christ,” Brian says.

“And we’ve been convicted that the best way to reach new people was to plant new churches.”

However the Huon Valley presented a wholly different set of challenges.

“The Huon Valley is a country town with a reputation of being a difficult area resistant to the gospel, because of strong New Age, Green & alternative lifestyle influences,” Brian explains.

“It also tends to be a closed community that is difficult to penetrate for new comers.”

Pastor Vaatstra oversaw the planting of Redeemer Christian Church there in November 2009.

He believes making headway depends on the team maintaining a strong sense of their own weakness.

“I am weak, the church is fragile, but Christ has all authority in heaven and earth,” he says.

It’s the once piece of advice he would pass on to church planters after ten years of establishing congregations.

“Be confident, not in your ability or the abilities of your team, but in the Ascended Christ,” Brian urges.

“He promised, ‘I will build my church,’ and he’s given gifts to the church for this purpose. He will do it, by his Spirit as we preach and teach the gospel boldly and prayerfully.”

Brian Vaastra is part of The Geneva Push coaching network.

Click here to hear him discuss the strengths and weaknesses of church planting hubs with TGP’s Mikey Lynch.

Confessions Of A Failed Church Planter