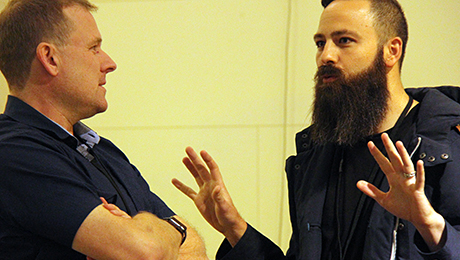 That heading feels like click-bait. It’s not meant to be. It just reflects my frustration that the word 'pastor' feels loaded. Or maybe imbalanced.

The Christian tradition I’ve grown up in has shaped the idea of what it means to be a pastor, or shepherd, God’s people. I read something a while ago from Eugene Peterson that resonated with that understanding. He describes the role of a pastor like this:

This isn’t a critique of Eugene Peterson (his book “The Contemplative Pastor” was a formative book at bible college for me) nor is this a call to “corporatising” ministry. And while I know not everyone reading will have the same view of pastoring as Eugene Peterson, I think it’s fair to say that our reformed heritage tends towards seeing the role of pastor as teacher, counsellor, spiritual guide as more than an “overseer” or “organiser”.

With a little help from Don Carson I want to return to this in more detail in my next post. But for church planters, there are a number of dynamics at play when planting that highlight the imbalance in our understanding of “pastor” that can limit the “effectiveness” of a planter when planting. Here’s one example.

The rate of change in plants

For most plants there is a much higher rate of change within the community. From new relationships being formed, new ventures being tried, structures being constantly constructed / destructed / tweaked / critiqued / scrapped, and the community size generally growing at a higher rate than congregations with history, if only due to the fact that the starting number was small.

And here’s the dilemma – in the startup phase, is the planter a pastor-in-waiting? Is he merely a Christian entrepreneur who’s waiting to put on his big-boy pants and do the real job of shepherding?

The impact on the planter

Now I know that this is a simplistic example to a complex issue. But it’s a real issue. If planters feel like they’re doing less than their biblical calling there is a real danger they will adjust what they do, and in the process be less effective for the Gospel.

And this imbalanced view of being a “pastor” can be reinforced from three sources – the heart, the pew and the bleachers.

From the heart
A planter I was recently talking to about leadership development wondered where he’d find the time for this. The church was growing, the intimacy of relationships with his initial launch group were already growing harder to maintain, and he wanted to “know” the people God had given him. He wanted to “pastor” them. It wasn’t said out of arrogance or pride, but born from something ingrained in his heart that this was his primary job. So when time is limited, what’s the right choice?

From the pews
But this understanding also comes also from the gather community, from the pews. Launch teams for a strong bond to each other. The time spent praying, planning and serving alongside each other in heartache and joy can be hard for a Christian community – even one with a sense of mission – to give up. It’s natural to long for those days when the lead pastor was in their lives, more readily accessible to them, “pastoring” them personally. To the person in the pews, the individual, that can feel more like what a pastor should be and do.

From the bleachers
Lastly, there’s the commentary (real or perceived) from those outside the church, the Christian bleachers, particularly in periods of growth where structures and relationships are trying to adjust to a new dynamic. The commentary from those outside can be that this planter cares more about numerical growth than spiritual growth. More about pulling people from other life-boats onto theirs, rather than helping them climb out of the water and rescue others. More about building their kingdom than God’s kingdom.

Now here’s why I’m thinking these things out loud – because church planting is hard work. And I want planters to be encouraged in their work, having a clear understanding of what they’re called to be and to do. The place I want them to find freedom in is God’s Word, not human expectation. And the only thing I want to constrain me is God’s Word, not human expectation.
So at the risk of being simplistic, we can either say that planters aren’t pastors, or we can say that perhaps we need to readjust our understanding of what we mean when we use that word. That’s where I’ll pick up next.

These thoughts are unashamedly inspired / ripped off from Andrew Heard's thinking on Biblical Leadership.  If you haven't been to the Team Pastoring conference, you should head along.