Winning the world, one chat at a time 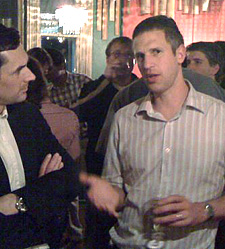 Church planter Ben Underwood says there are no ‘magic levers’ when it comes to growing a church plant, growth is God’s spirit and sustained effort.

“It’s like Jed Bartlett’s advice about economics – you’ve got to pull a bit on all the levers , you can’t just give one a big yank and think that that is the key to success,” he says.

Reflecting on his time building up a congregation in Sydney’s Darling Point, Ben says that momentum was slow to build and involved a lot of ‘trying stuff’ and ‘ditching stuff’.

“You’ve got to be ready to be prophet priest and king,” he says. “Work on every front.”

“Preaching, small groups, Sundays, evangelism, stretching your good leaders, getting a weekend away happening, innovating new ways to raise local profile, or draw people in. It’s all worth spending some time on.”

Ben began with an area over-flowing with young professionals, a sandstone building and the remnants of a congregation.

“There were few churches with young workers in any numbers, and they were overrepresented in the local community and vastly under-represented in our existing congregations,” he remembers.

“Growth was slow – many local contacts came through weddings booked for St Mark’s, and often the people were already well established in habits, routines, and local friendships, and were coming to us with a certain agenda and a date for a special day on their minds.”

But he quickly discovered that people new to an area were looking for new friends, and this provided the basis for an evangelism strategy.

“And if they were befriended by people at church, they could become very involved very quickly.”

“Often such people were open de-churched types or churchgoers with little or no experience of evangelical ministry,” Ben says.

“But there was a great deal of Christian growth among these people, beginning with their understanding the gospel and trusting in Christ. And people like that became hungry to learn and grow, and willing to re-prioritise their lives to make church part of who they were.”

Ben has now moved on to work in Western Australia, but he says the basic truths for church planting still hold true.

“Good church planting is founded on good ministry – through God’s Word and to His people,” he says.

“Momentum may not build fast but you’ve got to keep blowing, blowing, blowing in the sails – putting energy into the plant over a long period. Work at getting traction and bite in preaching, praying every day for God’s Spirit to guide and empower you.”

Ben Underwood is a church planter coach for The Geneva Push and currently works as the associate minister at St Matthews Anglican Church in Shenton Park, Western Australia.

Coaches assist the personal and professional development of all church planters who have been assessed and approved by The Geneva Push.

Click here to find out more about being assessed.