David Mitchell is a friend and colleague from AFES, who leads the AFES staff team at Curtin Uni in WA. His Masters’ thesis has been published in the Australian College of Theology Monograph Series: The Son of Man in Mark’s Gospel: exploring its possible connections with the Book of Ezekiel. 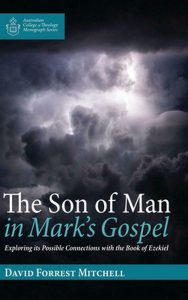 I got a copy at his Facebook LIVE book launch a few months ago and just got around to reading it. It’s well written, despite its technical nature as a New Testament studies thesis with lots of untranslated Greek and Hebrew and an interest in a range of minor and complicated specifics.

It’s a good stretching read if you want a bit of a theology/exegesis workout. I like giving things like this as reading assignments  to students, trainees and staff who might not be so sharp on this kind of stuff… or who prefer how-to stuff or apologetics stuff (I normally use the silver New Studies in Biblical Theology series books). But doing this is a bit like pouring a bucket of cold water over someone, so it’s always best to find something that is well written. I’m not going to inflict Mark Seifrid or William Dumbrell on them. And David Mitchell does indeed write well, so there’s that!

The thing I most enjoyed about this was the stuff on Ezekiel, towards the end of the book. It was exciting to be shown the obvious: just how much Ezekiel is a vehicle for the LORD by his Spirit to communicate his message to the people. There’s something a bit robo-prophet about Ezekiel, that as this ‘Son of Man’ he is completely constrained by the LORD’s will and word. Through this ‘Son of Man’ the LORD brings his message of judgment and salvation to his people. In  fact, in the prophetic vision  of chapter 37, the ‘Son of Man’ is even an agent of the resurrection of Israel through his prophetic words. The final nine chapters of the Book of Ezekiel are also describing the nature of the end-times temple, drastically different than the Levitical temple, and in this, Ezekiel ‘the Son of Man’ is like a new Moses, laying out the plans.

This got my mind whirring: in the weird, apocalyptic world of exilic prophecy, with cosmic visions that surpass the normal world of land, Davidic king, purified Levitical temple and new exodus… there is also this different, elevated ‘Son of Man’ prophetic role. Also tantalising is the human-like figure in the theophany of the LORD by the Kebar River in Ezekiel chapter 1, and the heavenly Son of Man in Daniel 7 (and Daniel arguably builds on Ezekiel’s prophecy). What does this all mean and how does it fit together? Yeah I dunno exactly… but both the heavenly visions and the fully-possessed-and-directed Son of Man prophet seem to prepare the way for the incarnation, don’t they?

A finally, cool little thought from David is how he suggests that the reason that Son of Man only appears in the Gospels on Jesus’ lips, and doesn’t appear as a title in the rest of the New Testament: he raises the historically plausible suggestion that perhaps it was so idiosyncratically associated with Jesus’ earthly speech that it just didn’t ‘feel right’ or ‘come naturally’ for his followers to use it for themselves. Could be…