There’s a word for that: Standpoint epistemology

Didn’t know what the word for this was: ‘Standpoint epistemology’. Especially the questionable claim that oppressed voices are somehow more objective.

Standpoint theory supports what feminist theorist Sandra Harding calls strong objectivity, or the notion that the perspectives of marginalized and/or oppressed individuals can help to create more objective accounts of the world. …

Through the outsider-within phenomenon, these individuals are placed in a unique position to point to patterns of behavior that those immersed in the dominant group culture are unable to recognize.

The soft version of this is great: minority voices see things others don’t. The hard version is where we get the ad hominem rejection of privileged voices and the authority fallacy favouring oppressed voices.

Do any/many non-denominational missionary societies give constitutional power to their missionaries? I note, for example, that CMS Australia branches have Missionary Members, but some constitutions specify these are not-voting members, which is surprising!

It seems these societies developed, very much unlike denominations, often without giving any power to front line ministry workers. Part of what makes them agile also makes them (kind of) authoritarian, in that sense.

About critical histories of evangelicalism

9 months ago
Critical histories of evangelicalism, or modern culture (or whatever else) are super illuminating and helpful. But these histories, themselves, need to be read critically. Be alert to:

This year we ran a significantly different, scaled-down, Hobart-based Mid Year Conference for the University Fellowship of Christians, the UTAS AFES Group.

This is the second year in a row that we have not held a standard MYC, which has otherwise run every year since 1996.

Review: Spacemaker: how to unplug, unwind and think clearly in the digital age by Daniel Sih 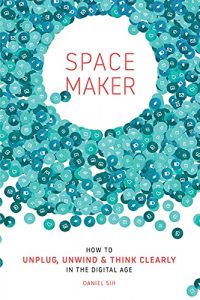 Daniel and I have been friends for years, and he gave me a copy of his book, Spacemaker (at Wandering Bookseller, on Amazon, audiobook also available, narrated by the author). Fittingly enough, he gave it to me at a time when I didn’t have the space to get around to reading it. Knowing his excellent video course stuff, List Assassin and Email Ninja, and sharing a love for productivity stuff with him, I must admit I kept assuming it was a book about productivity… and perhaps where my head was at, felt less urge to read a good summary of stuff I already knew, so that probably slowed me down in getting to it. Actually it turns out it’s not about that stuff, but instead about digital hygiene and burnout and wellbeing. I finally got around to charging through the audiobook on double speed (my first double speed audiobook experience: a great way to get through things!).

The productivity books of the 2020s: not about being Highly Effective or Getting Things Done but Deep Work and Making Space

The book opens with a gut-punch story of female professional who was so addicted to work and digital activity she was hiding it from her husband, sneaking the phone into the bathroom to do emails on the toilet, pretending to have fallen asleep, when actually still using her iPad. A powerful opening illustration, a hook to draw you into the the purpose of the book. Wow.

It’s interesting to ponder what kinds of productivity books are needed in different moments. I’m sure Daniel would agree that the amazing insights of Stephen Covey’s 7 Habits of  Highly Effective People or David Allen’s Getting Things Done are still very powerful and relevant books for people to read and implement.

But it’s interesting how increasingly the big need we have, is not just to manage priorities, or process our inboxes, but establishes disciplines and values to not be consumed by the constant barrage of TODOS and the constant stimuli of digital ephemera. To be effective and to get things done is not just to have a system… but to actually have values, habits and character to block out space to be present and reflective.

Furthermore, what’s unique about the last twenty years, is the enormous increase in technological development and ubiquity. There have been an increased need for theologies and philosophies of technology since the industrial revolution, but the need has simply intensified and complexified. And so this book also provides us with a philosophy of technology.

The first major section of the book, Paradigm covers ground that is probably familiar to many: the effect that over-use of technology has on our minds, lives and communities; the way technology ends up controlling us; the way limitations and love are vital to our wellbeing. This is a good summary of all the TED talks, Atlantic articles and seminars you’ve probably come across on these important topics.

Daniel covers a lot of ground in a clear and accessible way. This section would serve as a great primer for high schoolers and young adults needing to be become more aware of these issues.

The next two sections are practical advice: providing Principles (Set Limits, Plan Patterns, Assign Rest, Cultivate Community and Embrace Silence) and then Practices (Start with Holidays, A Day to Think, Digital Detox, Weekly Day of Rest, Daily Refresh, Daily Pause). His many years of work as a consultant and a pastor makes Daniel very good at setting realistic goals, often emphasising not to try to do everything at once; and encouragement the formation of sustainable habits, urging the perseverance with a new resolve for four weeks.

He is also great at stressing the many differences in life, culture and personality that mean there is not a one-size-fits-all for these things.

These sections are so full of great wisdom and practical ideas I could imagine returning to them multiple times in my life, and certainly would commend them to anyone.

Daniel is an entrepreneur and a church leader and a consultant and a geek. He knows all about productivity and effectiveness and work hacks and apps. He’s a great communicator, storyteller and diagram-drawer. He draws in a lot of his own personal story, a bunch of insights and research from various sources and stories from his consultancy work. He also occasionally incorporates spiritual insights and patterns from the Christianity and church life, in a way that I believe would still be accessible to people whether or not they were Christians.

Some of my take-homes

I found a lot in Spacemaker told me why things I was already doing was good and healthy. So there was something affirming and strengthening in that. Knowing what and why something works also makes it easier to teach to others! But here were a few stand out little things along the way that I took note of:

This would be a good book for you to read and reflect on if you are wanting to have a good look at the overall patterns of their life and work, with a particular focus on the unwelcome ways that technology is affecting them.

Daniel really has come up with a very helpful and healthy book for individuals, parents, leaders, pastors. In fact, I could imagine doctors, counsellors and psychologists pointing burned out patient to this as a workbook for building healthy patterns. As someone who gives a lot of my time to discipline and mentoring young people and young leader, as well as coaching and supporting experiences leaders, this will be a book I will be recommending and giving away a lot, I think!

Spacemaker at Wandering Bookseller, on Amazon (audiobook also available, narrated by the author)

Shift in identity that occurs for parents of children with disabilities

In Tim Keller’s book on suffering:

“Andrew Solomon, in his study of parents who bear children who are deaf, autistic, schizophrenic, or otherwise disabled, argues that they experience a shift in identity. This in some ways is true of anyone in severe adversity.

“Severe suffering turns you into a different person and some of the people that you once felt affinity for no longer look the same to you.”

If building/renovating a church building, think about kitchenettes/zip taps for various spaces. It makes seminar spaces, board rooms and offices so much more pleasant if you don’t have to walk ‘all the way’ to the main church kitchen.

Wonder what the distance of ‘all that way’ is? Not far. Twenty metres? Less if you have to use stairs or go from one building to another.