Missionaries don’t spend too long on your supporter email newsletters. They just have to be good. Just fine. That’s all.

If you’re in The Conjuring universe & you call for a priest & a Christian Union staffer turns up instead in an Easter Mission T-shirt & NTE Keep Cup, you’re not feeling reassured 🙂

Just a random silly thought. I don’t actually have a serious point to make!

People bring up rollerblading when interviewing me at events and it rarely ever works. It’s a hospital pass. Because they rarely give contact for WHY they have suddenly brought up rollerblading. And they haven’t really thought of an actual interesting question. As a result I’m left having to do all this work to save an awkward out of context in-joke.

Worse still, it makes me look somehow as if I’m the weird one… as if I asked to be asked about rollerblading or something!

Actually, I’d rather not get interviewed before I preach, but instead just get a brief introduction (again without any odd, unexplained references to rollerblading).

But if you’re going to ask questions, make sure you actually think through what will be good questions!

Some of these are true in Christian ministry circles too… 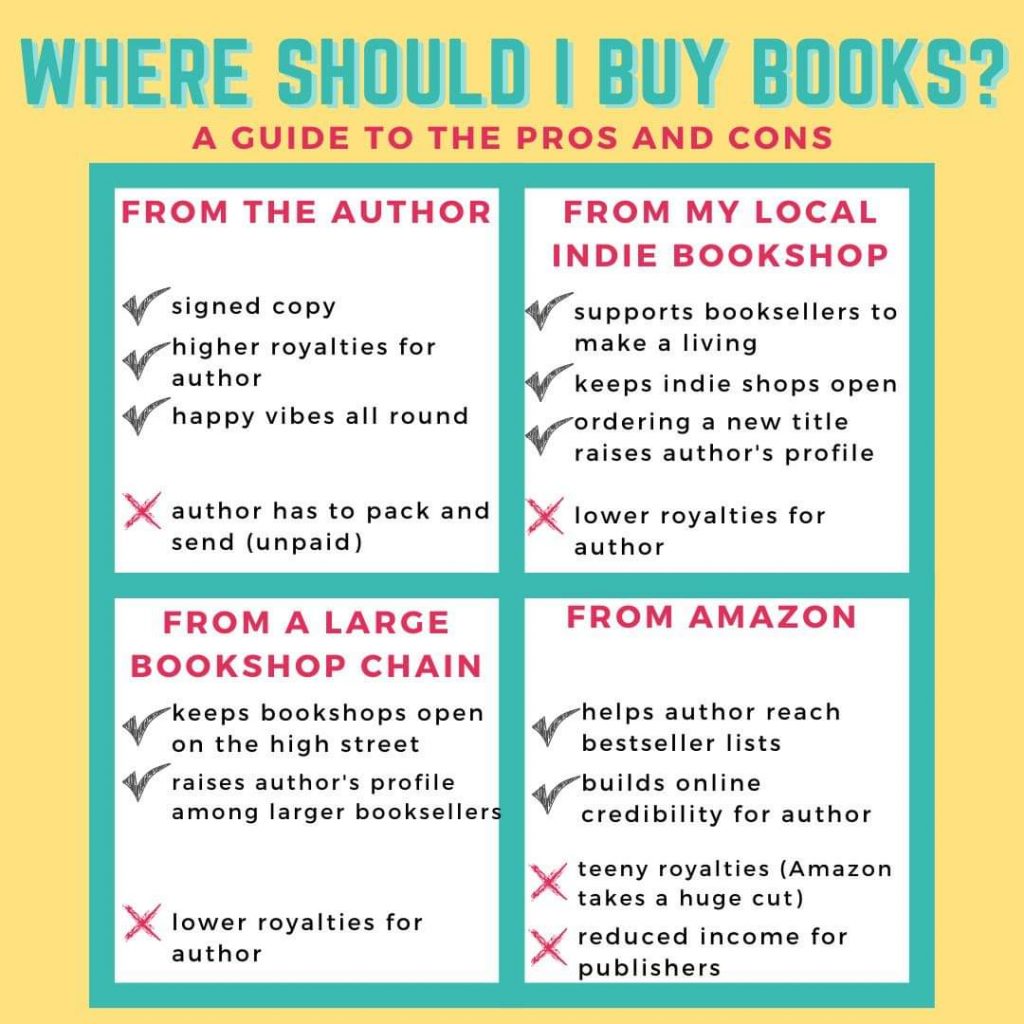 To this diagram could be added

Option 5: Buy direct from the publisher

Positives (+) Higher royalties for authors. Helps the publisher (who takes the) most risk in the venture, after the author Doesn’t feed into the evil practices of Amazon & the inevitable problem of censorship by Amazon of Christian perspectives.

Negatives (—) Doesn’t help bookshops on the High Street stay alive (Thanks to Ian from @matthiasmedia for these thoughts!)

Jesus swaps places with the leper: stays outside in lonely places

I hadn’t seen it before until Paul Kupke showed me in his recent sermon at CRC Kingston: that Mark does a little literary flourish to hint at substitution at the end of the Mark 1.

It becomes Jesus, rather than the leper, who is outside in solitary places at the end of the story.

Stepping down from The Vision 100 Network chairman role: reflecting back on twenty years

I have told The Vision 100 Network, Tasmanian church planting network, of my intention to step down as chairman and committee member at the end of this year, having served as chairman for eight years, and being a founding member and continuous member of the committee for almost twenty years, since 2001. This was partly about making space for me personally, but also allowing for some ‘refreshing of the board’, including the chairman position.

This is a significant moment for me personally. The story of The Vision 100 Network has spanned most of my adult life, Christian life and Christian ministry. It’s been a point of continuity through all of that and so it’s huge for me. I wanted to take some time to reflect on this experience. This is not intended as a general history of The Vision 100 Network, so much as personal reflections on my involvement and what it has meant to me.

In a sense, The Vision 100 Network has been about preserving the legacy and ensuring the impact of an extraordinary work of God in Hobart in the late 1990s, when dozens and dozens of people came to faith in Christ through the vigorous gospel preaching of David Jones and Pete Woodcock, through the patient evangelistic Bible studies led by Jo Kelder and through methodical Bible studies organised and led by Phil Dowe. The wonderful thing is that this explosion of new spiritual life wasn’t scattered, but was preserved and propagated through planting new churches and renewing existing churches and the appointment of new leaders. As a result, the Tasmanian church scene, especially among Presbyterian and Reformed churches, was dramatically renewed and energised to serve God and reach the lost in the early twenty-first century.

The Vision 100 Network as a fellowship and an organisation highlighted and championed and celebrated and resourced evangelism, church planting, preaching, deep theology, contextualisation, entrepreneurialism and inter-church fellowship (both across the State as well as across the country). This network helped facilitate the influence of MTS, Geneva, theological colleges, AFES and City Bible Forum in the State and gave birth to the New Front Door church IT ministry. By God’s grace, leaders have been raised up, not just for Tasmania but also some significant leaders for churches, parachurches and missionary societies in South Australia, Victoria, the Northern Territory and beyond.

We dreamed and prayed for one hundred new churches in Tasmania and the establishment of a church planting centre to resource and support this. Instead, the network has grown from three churches to around twenty churches, of which nine churches are new church plants. It has been a lot slower than we dreamed and a lot harder than we thought. There were a lot of failures, false starts and struggles. We faced the frustrating reality that the thriving, church-planting church was an exception and not the rule. Likewise, we realised that the MTS training process does not guarantee that every future leader will necessarily be an entrepreneurial church-planting leader. We have had to adjust expectations of what normal looks like, and then work towards that wisely and steadily and patiently. We have experienced, as every denomination and network does, conflict, incompetence, apostasy, neglect, false teaching, resistance to change and burnout.

However, the work that has taken place has been good work and enduring work, too. There is a stable, healthy network of churches and parachurches working together in Tasmania. As I said above, The Vision 100 Network as a fellowship and an organisation highlights and champions and celebrates and resources evangelism, church planting, preaching, deep theology, contextualisation, entrepreneurialism and inter-church fellowship (both across the State as well as across the country).

Nikki and I have been a point of continuity for this work across that whole stretch of the last twenty years. And especially as our peers began to go off to theological college in Sydney, we deliberately stayed behind as a point of continuity for the local work. That was an especially hard and lonely time. It was a time where some necessary reflection and establishing was needed, especially for the ministries around Crossroads Presbyterian Church, to help a young and volatile and flawed movement mature and stabilise. This itself was difficult and emotionally challenging. But we were also working through this as the momentum of those early years began to slow down. So yeah, it was a tough season for us. Really tough. But through that season we built structures and began to learn how to lead an organisation and a network.

In the last ten years, the ‘theological college exiles’ have returned to Tassie and found their feet again as long-term leaders of churches and parachurches—as well as contributors to their denominations. This was also a time when significant founding leaders and mentors—Brian Vaatstra and then David Jones—left the State. During this time we went through the process of seeking to learn the lessons of a decade of church planting efforts. There was need for shutting things down, refreshing things and rebuilding some of the mother churches. Again, this was hard and slow. And when a network learns lessons, that never happens in an instant, but we were still repeating some of the early mistakes, even as we slowly moving to a better approach. Cultural change has a long tail.

This last ten years has also been the time when we built up the Event Manager position first with Rachel Johnstone and then Lyndal Jolly, Jake Tuit and now Jess Prins filling that position. This role is crucial to the strength of The Vision 100 Network in the necessary events, communication and administration. Also in the last ten years, Nikki and I were involved in the founding of the national Geneva Push church planting ministry, which was such a wonderful blessing in providing for us and other networks around the country the kind of assessment, coaching and support we could never effectively provide as a small local network.

All of this has been huge and hard and slow. There has been lots of moments of pain, disappointment, frustration. There have also been heaps of encouragements, successes and delights. It has all largely been attempted while been significantly under-resourced, scrambling to make things happen on pocket change after some initial start-up money from the early 2000s dried up. It has been hard and slow work on top of family life and my ministry, first at Crossroads and then with AFES. So many conversations, meetings, emails, articles, workshops and sermons! But it has also been totally worth it, in helping establish a healthy, inter-denominational, state-wide fellowship of Christian leadership working together for the cause of the gospel mission.

There’s plenty more to do and I am still part of it, just not in the same role. It’s in good hands. And there’s new generations of leaders coming into the State and being raised up within the network. It’s awesome that it doesn’t all rest on me or any other single personality. That in itself is a sign of success, isn’t it? And although we are nowhere near one hundred new churches yet—Lord, make it so!—it is so fantastic that there are nine more churches in Tasmania and countless more converts and leaders. And God-willing there will be more to look forward to in the coming years.